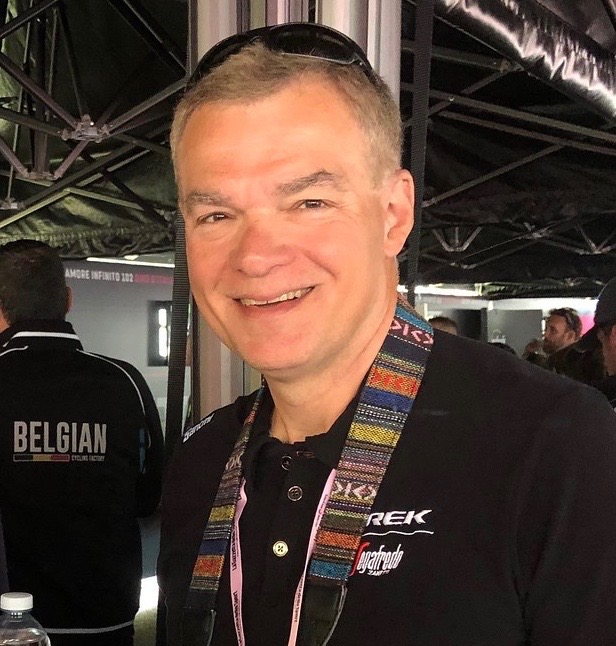 A co-worker got Rick back into cycling about ten years ago when she asked him for a donation for a Bike MS Ride. What piqued his curiosity was why anyone would willingly want to ride 100 miles in a row. So, he decided to dust off his 30-year old bike, and the rest, as they say, is history. He has upgraded his bike twice since then and now rides thousands of miles per year. A few years ago, he traveled to Europe to cycle during the Tour de France and Giro d’Italia.

He has been a member of TeamCBC for eight years and was the TeamCBC Secretary before becoming President. Rick and his wife Joanne are both retired and have resided in Apex for over 20 years. They have two grown children and two grandchildren, who all live in the Triangle area. 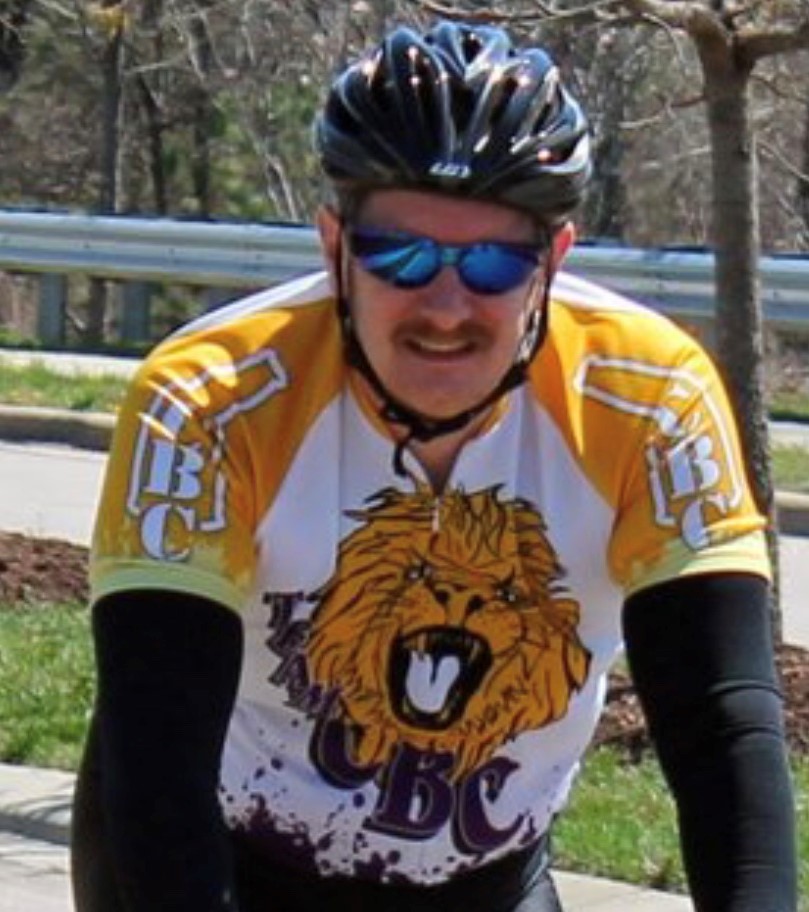 Dan started cycling in earnest at the age of 14, riding and learning with a club in his native upstate New York. Many years later, having relocated to the Triangle area, he took a solo ride south out of Apex and joined up with a nice, cohesive group that clearly knew how to ride together as a team. They must have looked at him like he had two heads when asked if it was an organized ride. He quickly found a home in the camaraderie of TeamCBC, and joined the board of directors in 2017. He has served as Treasurer since 2019.

Dan has two kids nearing or at adulthood and lives in Apex with them, his wife, and their 8-year-old golden retriever. He works from home for a large health insurance company, in the exciting area of data quality. He also holds a private pilot certificate, though he rarely gets in the air… but retains the obligation to look up at every aircraft flying by. 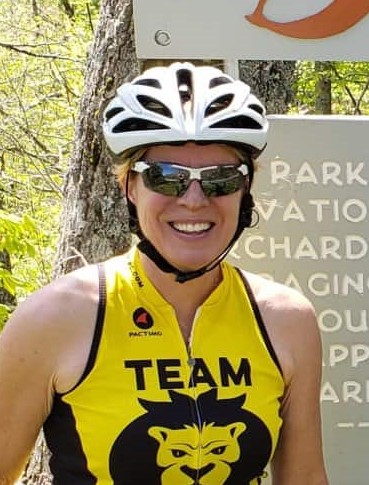 After the kids flew the nest in 2015, a good friend invited Penny out for a group ride with ToD.  50 miles!  Really??  Not so sure about that…but after a few weeks of solo rides, she was off on her first group ride, pleased that she managed to stay ahead of the gravel rider with a backpack.  Of course, the cycling bug bit, and the weekends were soon filled with new adventures and friendships.  She joined CBC in 2019, invited through friendships with current members.   She has enjoyed being a member of several clubs over the years – TnR, Gyros, and serving as Event Coordinator/Ride Lead for ToD.   She has served on the Board of Directors Velo4Yellow as Fundraising and Donation Chairman.  She thrives in volunteering, being a member of the cycling community, and sharing her love for the sport with others.

Penny currently resides in Cary and is the Carolina Sales and Distribution Manager for AEM Group, with a 25+ year career in electronics component sales. She is President of the Carolina Electronic Rep Association as well as her HOA.  She enjoys long walks with her Sheltie, Passion, and spending time with her son, Alek, who resides in Raleigh as well as hiking and kayaking if she can manage to part with her bike! 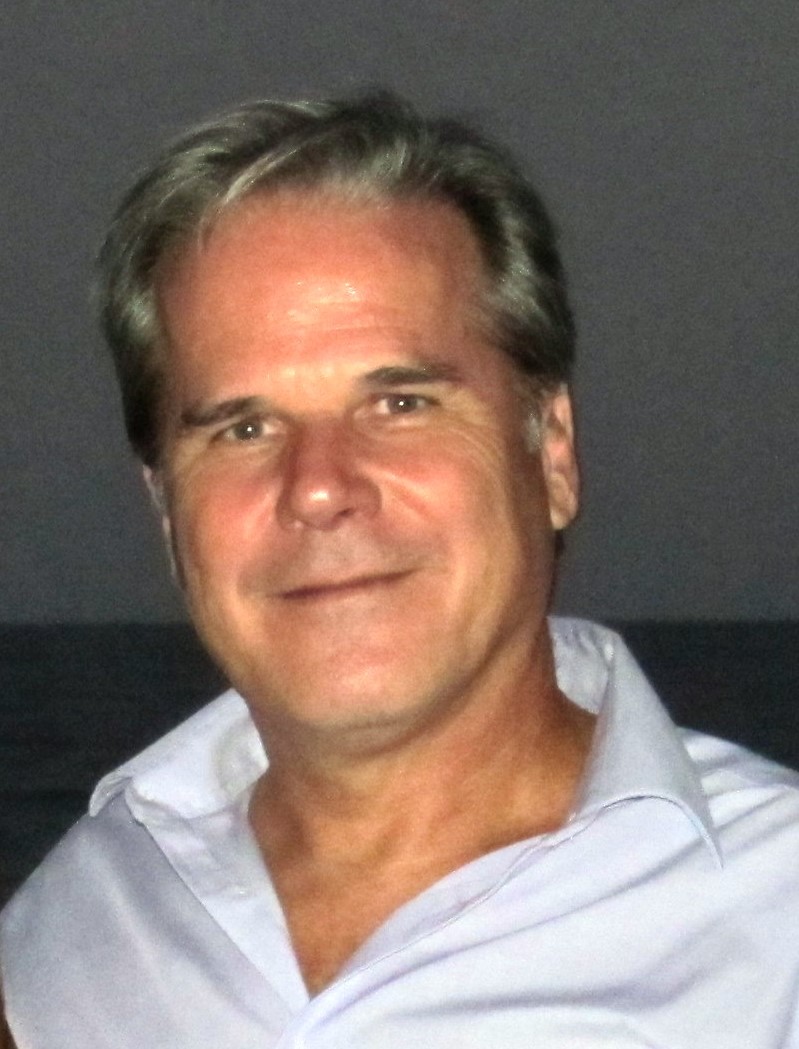 Danny is rejoining the TeamCBC board for the second time, having been one of the original five founding board members, and has been involved in virtually every aspect of road cycling for more than 60 years. Like most of us, he first started cycling as a kid but only got serious about it during rehab from knee surgery in the late 70s. A friend who was an ex-bike racer encouraged him to get his racing license and enter his first race, and he was immediately hooked. He raced USCF (now USA Cycling) road races and criteriums in the ’80s, raced Masters in the ’90s, then switched gears entirely and began Ultramarathon cycling in the late ’90s. He has ridden across the USA (twice), crewed for the Race Across America, and currently holds two UltraCycling records. He also ran a coaching business for many years and still dabbles in occasionally coaching cyclists and triathletes.

Even though cycling was his passion, engineering paid the bills. Danny retired after 40 years as an engineer/consultant in 2018 and spends most of his time now doing a seemingly infinite number of projects around his house in Holly Springs and spending quality time with his wife, children, and grandchildren. 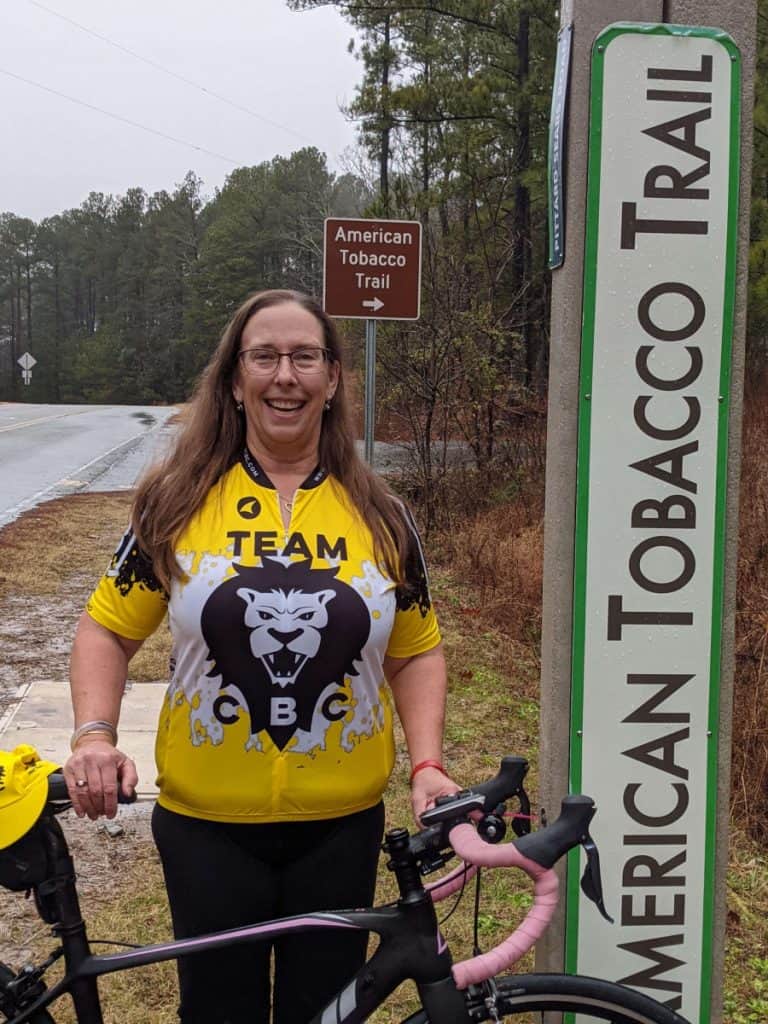 Nancy has been a member of Team CBC since moving to Holly Springs with her husband Jerry from Twinsburg (NE) Ohio in 2008. During a neighborhood progressive dinner, an area cyclist told them about Team CBC. They were delighted to find this group to ride bikes with, as well as a place to enjoy tasty beverages with friends. In 2013 they built a house in Chatham County right off the American Tobacco Trail.

In her professional life, she was an IT Project Manager, retiring in 2017. She now spends time volunteering at SAFE Haven for Cats and singing with 3 different groups. In addition to serving as Gear Chair for Team CBC, she serves on the Board of the Cary Community Choir. She also is a member of the Woman’s Club of Raleigh, where she is the Chair of the Environment service project group and sings with the Woman’s Club Singers. At home, she shares the house with Jerry, 4 cats, and 5 bicycles (n+1)! She and her husband both enjoy riding bikes, with Jerry putting in many miles on the road with friends, and Nancy riding the ATT. 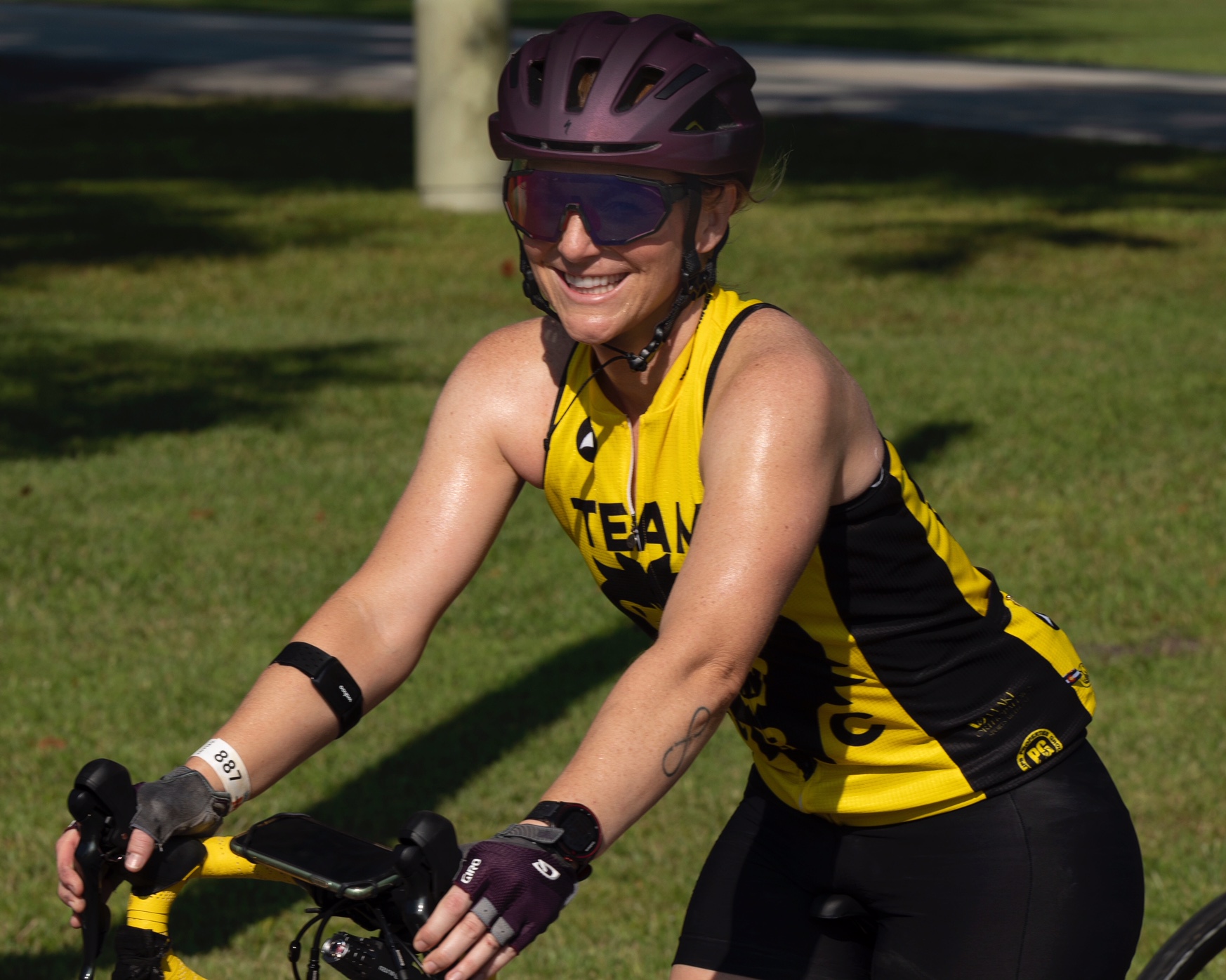 Katie-Rose Crater is the Executive Producer at Triangle Blvd, in Raleigh, NC. She is an avid road and trail runner, cyclist, rower, and outdoor enthusiast. When not working on a commercial or documentary, KR can be found outside with her husband, running her Australian Shepherd, backpacking in Black Mountain, riding bikes with Team CBC, getting her fingers dirty in the yard, or chasing around her three teenage step-daughters.
Mrs. Crater earned her Bachelor of Arts from the University of North Carolina at Chapel Hill. She ran on UNC-Chapel Hill’s Track and Field team, was a coxswain on the Men’s Crew Team, and was awarded a Monogram. 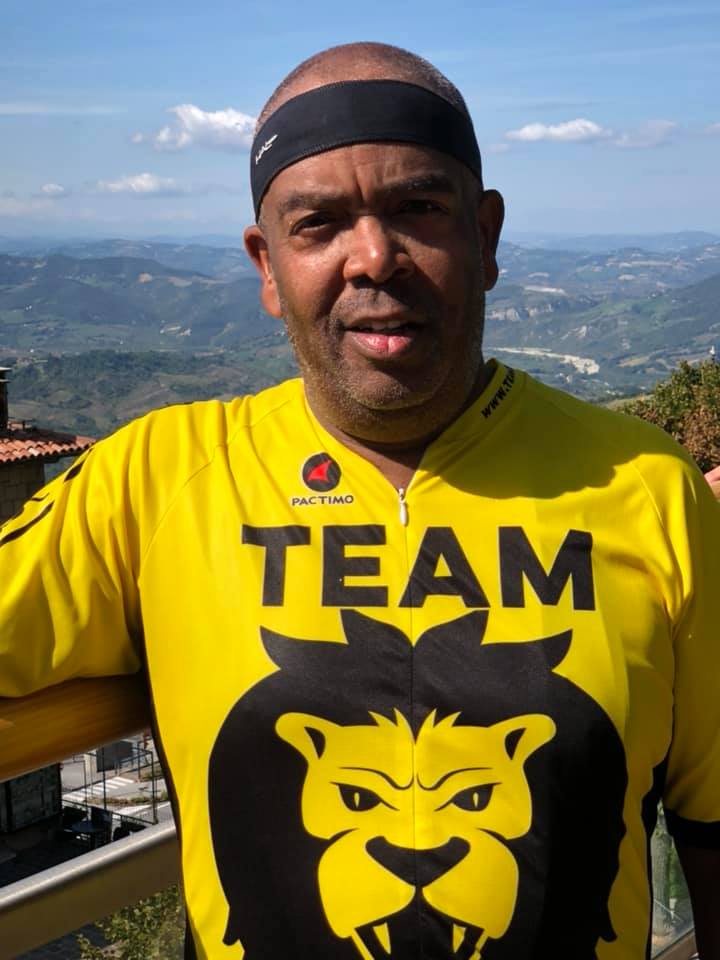 Jeffrey has been an avid cyclist for many years, having been a member of one of the largest cycling clubs in CT since 1999. He joined TeamCBC when he moved from Connecticut back in 2015. He moved to work at Metlife and to be closer to his sister, who had moved to the area earlier. His first CBC ride was a donut ride, and it's been a great experience with the club ever since. He especially enjoys traveling with his bicycle making stops in Spain, Italy, Jamaica, and of course, many destinations right here in the US. 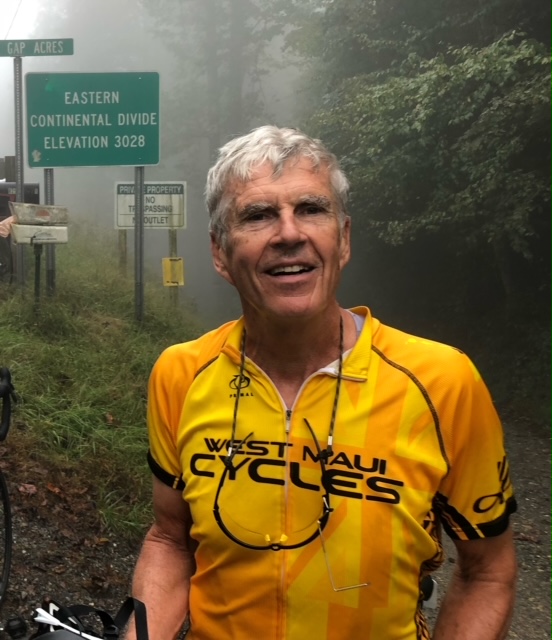 Jim is an avid bicycle rider and can be found most Sunday mornings at the TeamCBC 19+ 50-mile group ride. He and his wife retired from Northwest NJ in the fall of 2018 to be closer to their grandchildren. His retirement started by doing the Cycle North Carolina Mountains to Coast Ride. While crossing the state he had the good fortune to meet several CBC riders. Once back in Holly Springs he decided to try out a group ride since he lives within a short bike ride of the Brewery. In NJ he mostly rode by himself on rural backroads. When he saw how narrow the shoulders were in NC he was glad to have the safety of a group.

Over the years, these rides have become a highlight of each week. He has found TeamCBC to be an extremely welcoming group and feels fortunate to have met many friends as a result of these rides.

Being new to the area he finds himself constantly exploring, whether on long bike rides or riding through local neighborhoods. As ride coordinator, he hopes to use this knowledge to continue the CBC tradition of safe and inclusive group riding for all. 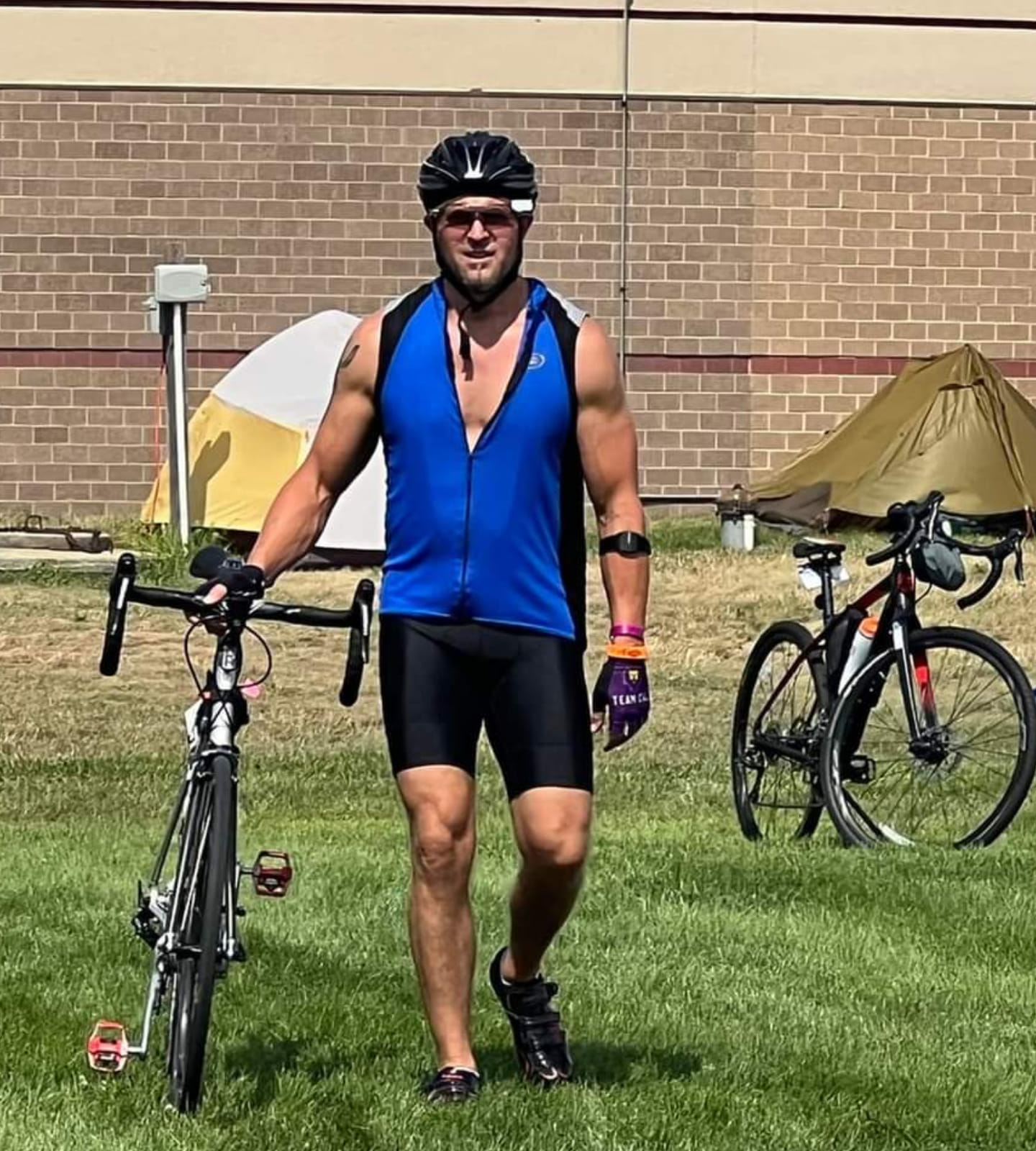 Chris is new to the sport of cycling, having started in June of 2022 at the request of Treasurer Dan Leinbach, who asked him to “try out” a road bike during a family trip to Florida.  He had not been on a bike since he was 12, but after 24 miles of excruciating pain (in the butt), Dan asked him to go to RAGBRAI at the end of July.  With literally six weeks to train and motivated by utter fear of failure, Chris schlepped up to Cary several times per week to ride with Team CBC, where he quickly found a passion for cycling.  Initially enticed by beer, physical challenge, and avoidance of what seemed to have become a mundane existence, Chris has learned there is much more to cycling than just riding and has never met so many inspirational, supportive and motivating people.  He now finds himself an annoying evangelist of cycling with everyone he meets.

Professionally, Chris is a psychologist who owns the Haymount Institute for Psychological Services in Fayetteville and co-owns PLUS Dueling Pianos in Raleigh, where he occasionally makes a fool out of himself on stage.  He has been married 20 years to his wife, Stacey, and has two awesome kids, Caden and Lilliana.